Roshtein is a popular Twitch streamer who gained fame playing and winning big on the slots – and live streaming his gambling to his viewers.

In Roshtein’s bio on his Twitch page he says that he likes to play games and watch anime. Despite being a gamer Roshtein has been able to find the time to carve a niche for himself in the online gambling space.

He started off with streaming in 2016. He streamed casino games which were simple and interactive at the time, and easily accessible through smart phones and online on computers. Roshtein started growing his avid following after he shifted focus to live broadcasting and streaming online slot games where his personality and charisma really shone through.

Roshtein likes to play high-quality slot games from trusted developers with interactive features. In fact, Roshtein lists down his favourite casino operators and developers on his Twitch profile page.

Nobody makes it in life without a little bit of luck and some help from technology! But when you manage to become famous playing online slots, even while streaming your gameplay on Twitch, you must be doing something very right indeed!

How Did He Become Famous?

Roshtein’s popularity can be credited to the live streaming of his gameplay on Twitch. His fans view him as an online gambling influencer and he has built a large following on this platform. He is also very active with the gaming community over at Discord, which helps him interact better with his followers.

Roshtein streams for up to ten hours each day. During these sessions, he talks about casino games that are available online and highlights developments in the industry that gamers should keep track of. Roshtein sometimes discusses different games like roulette, jackpot slots, video poker, arcade games & other casino favourites like bingo etc., during his live streaming sessions, however slots are by far his favorite casino game to play and definitely why most of his audience come to watch him playing.

Roshtein is knows as a high-stakes player and has won huge sums of money playing slots while streaming. This makes his gameplay even more exiting and entertaining for Roshtein’s Twitch followers.

As a gamer and slot enthusiast, on the surface it looks like his love for online slots is what led him to stardom. But if you look closer you will see that there were many other changes in his life and personal choices that came together and made him into the relevant influencer he is today.

Roshtein has always been an enthusiastic gamer and personable guy with a positive outlook towards life – but he struggled to find fame and professional success before finally making it big on Twitch.

How Can I see Roshtein Play?

Just go to his Twitch channel and watch him stream slots live. Roshtein has a large number of loyal fans so once you arrive there, chances are that you will be able to strike up a conversation with someone who is already watching the stream. Make sure you join in by sharing your own thoughts, opinions on gambling, slots, and on other casino games and experiences! 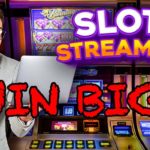